Hindus Pray for their Dead 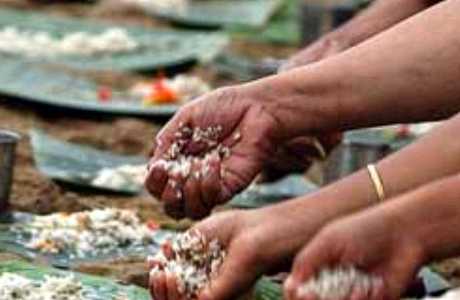 This blog is aimed at those of my fellow seekers who are not familiar with the concept and observance of Pitru Paksha.It is my humble effort to putacross the idea in the simplest way possible and the way I have understood it.
It is believed in Hindu tradition that when a person is born,he is born with three debts-
Deva rina (debt towards god)
Acharya rina(debt towards Guru) and
Pitru rina(debt towards forefathers and elders)

The Pitru Paksha is for remembering the departed ancestors and performing certain rites to clear the Pitru Rina and ensure their salvation(moksha)and our wellbeing.
“Pitru” means ancestors and “Paksha” means lunar period.The fifteen days of the dark fortnight (krishna paksha) of the month of Bhadrapada (according to the lunar calendar) or the month of Ashwin (according to the solar calendar)is considered Pitru Paksha- an ideal period for performing Pindadaan,Sharaddh and Tarpan for the forefathers.
Although these rites are to be carried out daily during this fortnight, it is considered that to perform them on the last day i.e. Mahalaya Amavasya or Sarva Pitru Amavasya,the most important and highly sacred day is as fruitful as one conducted in the holy city of Gaya or Varanasi.
The legend underlying the choice of this particular fortnight has its origin in the epic Mahabharata.

Karna,who was famous for his generosity had donated all riches to the needy but not food.Also he had failed to perform the shraddha for his ancestors.
As a result when he met his end in the war and went to the Pitru loka,governed by Yama,the god of Death,he was unable to get any food.
He then came back to the earth by the grace of Yama during this particular fortnight,did the needful and returned to the higher regions.
Since then Annadaana forms a a major part of this ritual.
Pitru tarpanam/tarpan is another significant part of this rite wherein the person remembers his ancestors. It could be departed parents, grandparents, great-grandparents..so on and offers food and water to the departed souls in the presence of a priest.
Apart from these there is Pinda danaa, wherein riceballs made with ghee and sesame(black til) placed on a banana leaf are offered to the ancestors.If a crow arrives and eats up the offering,it is assumed that it has been accepted by the departed souls and they have bestowed their blessings on their descendents.Food is offered to a cow too.
The meal for the ritual consists mainly of rice,dal,a vegetable made of yellow pumpkin,apart from other items and kheer.
Priests are also offered food and dakshina(cash).

Since the present generation is the bridge between the past(ancestors) and future(the coming generation),the performance of these rites is said to ensure the well being of all the three.It is believed that non performance may lead “Pitru Dosha” resulting in various problems like loss of money,progeny,frequent quarrels at home,ill health and so on.
Since this period is dedicated for the performance of post-death rites,no auspicious activities are conducted either at the temples or households during this fortnight.No new business ventures are started during this period
It may be slightly difficult for some of us to accept these traditions and beliefs in this era of logic and “show me the proof” kind of attitude.
But the one fact that stands out here is,apart from religious significance it is relevent in the modern era too,in a practical way.
We remember the loved ones that we lost,we feed not only the needy but also birds and animals and we tend to be charitable,in their memory.
Are these values not relevent and meaningful even today??