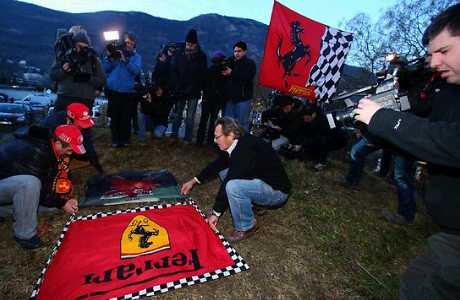 FORMULA One legend Michael Schumacher was not skiing at high speed when he suffered a severe accident, his manager says, blaming instead a “chain of unfortunate circumstances”.

Schumacher was skiing “with a small group of friends” as well as his 14-year-old son Mick, his manager Sabine Kehm told journalists at the Grenoble Hospital where he is being treated.

In the accident, “apparently the helmet broke”, she said.

“That doesn’t mean that Michael was travelling at high speed. He seems to have hit a rock as he took a turn. It was a chain of unfortunate circumstances.” Kehm added that the accident could have happened even “at 10 kilometres per hour” and took place during “a normal turning manoeuvre”.

Several media reports have suggested he was skiing at high speed at the time, with some saying he could have been going as fast as 60km/h to 100km/h.

Germany’s top-selling Bild newspaper quoted her saying that Schumacher was only gathering speed at the time, having apparently just helped a skiing companion to his feet after a fall.

“Michael was skiing on a normal piste with the group,” Kehm was quoted saying. “Nearby was an area of deep snow. Michael skied into it. He wasn’t going fast because he had apparently just helped a friend who had fallen down.

“So Michael just got going again, skied into the deep snow and then, we suspect, hit the rock as he entered a curve.

“Michael was not going very fast. But unfortunately as he took the turn, we assume, he hit the rock and was catapulted upwards and then struck a rock head-first.”

Schumacher’s condition has improved slightly after a second operation but he’s “not out of danger”, doctors treating him say.

Surgeons said they had “gained some time” by performing a successful second procedure on the seven times world champion on Monday night but he still remained critical.

A source close to an investigation into the off-piste accident at the upmarket ski resort of Meribel said that Schumacher’s helmet, which medics say saved his life, was smashed “in two” by the impact. Schumacher was skiing with his son when he fell and crashed into a rock. His son was unhurt.

Bild also quoted a rescuer as saying the split helmet was “full of blood”.

She added that several people had tried to sneak through the hospital and approach the former racer, and asked that he and his family be left in peace.

“There apparently was a person dressed up as a priest, who tried to get near Michael. I am asking everyone to let the doctors work and leave the family spend peaceful time with Michael,” she said.

His wife Corinna and two children are at the hospital in the French Alpine city where Schumacher is in a coma after he fell and slammed his head on a rock while skiing off-piste on Sunday.

News of the accident stunned the world and motor racing stars joined German Chancellor Angela Merkel and legions of fans in expressing their hopes for the recovery of the greatest champion in Formula One history.

Schumacher, 44, underwent an operation soon after being taken to the hospital by helicopter and surgeons performed a second nearly two-hour-long procedure on Monday to remove bleeding in the left side of the brain.

Jean-Francois Payen, head of the intensive care unit, warned at a press conference on Tuesday that Schumacher was not out of the woods.

“We cannot speculate on the future,” he said. “We cannot say he is out of danger but we have gained some time.”

He said scans showed that the removal of the bleeding had been done in a “satisfactory manner”, but ruled out Schumacher’s transfer from the hospital as it could be “dangerous”.

Doctors have said that Schumacher, who is due to turn 45 tomorrow, has age and physical fitness on his side.

He had been put in a medically induced coma to spur recovery. His temperature has also been reduced to around 35C to reduce swelling.

By being unconscious, the brain is also switched off to sounds, light and other triggers that cause the organ to use up oxygen as it processes the stimuli.

Messages of support for Schumacher and his family have poured in since Sunday.

Damon Hill, who fought several memorable on-track battles with Schumacher, said he was “praying” for his former rival.

Formula One quadruple world champion Sebastian Vettel, 26, who has said Schumacher was his childhood idol, said: “I am shocked and I hope that he’ll be feeling better as soon as possible.”

Schumacher, who won the last of his world titles in 2004, towered over the sport since his debut in 1991, winning more Formula One world titles and races than any other. He had a record 91 wins and is one of only two men to reach 300 grands prix.