R K Laxman: The Father of the common man was a child who just loved to draw 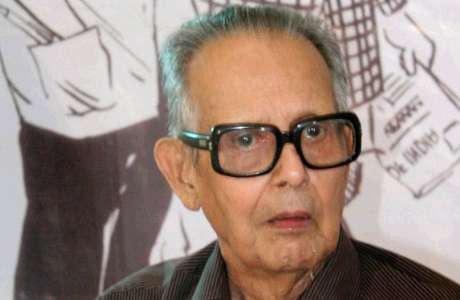 I say, can’t stand your Delhi winter,” he would say. The man who managed to look sunny, day in and day out through six decades and over 30,000 cartoons, stayed away from the country’s capital of political cartooning, and that was serendipitous.

Where else can you imagine the maximum cartoonist but in the maximum city? R K Laxman’s unmatched reader bonding stemmed from the way he harnessed the big city he went to as a young man from Mysore in the late 1940s. His early readers were fellow immigrants from every part of India — those who went on to make Mumbai a mini-India. Eager to pick up a new life and language, workaday English, they took to the English newspaper cartoon, an easy mix of a funny picture and chatty text. American cartoon historians have famously linked the rise of their metropolis in the early 20th century to the growth of comics. The Laxman cartoon is the closest parallel we have to that urbanising experience.

Not that the Laxman cartoon was a mere learning aid for the Mumbai migrant, the cartoonist was a masterly monitor of everyday life. Leaders and planners helped, as Laxman has repeatedly acknowledged. They made sure the country developed most unevenly. Mumbai itself threw up eminently cartoonable contrasts to the big life — one right in Laxman’s own vocation. Bal Thackeray, his one-time colleague in Free Press Journal, dropped out of cartooning and chose instead to work for cartoonists.

As for the rest of the country, it has just about caught up with the aspiring Mumbai (warts and all) where Laxman began his career. That gave him a good half century’s headstart. He just had to stay the course and let new readers troop in, as Times of India opened new editions. Whenever that happened, his reputation had already travelled ahead of the edition — thanks again to a Mumbai big enough to build brands from a JRD to a Lata Mangeshkar.

Through all these years, the Laxman cartoon hardly aged. Elaborately crafted on the lines of the legendary David Low, his display cartoon which featured recognisable newsmakers was a suitably distanced view of Delhi or wherever else the day’s news was made. He never felt the need to zoom in, yet stayed focused. Enough to comment on a scary phase of Narasimha Rao’s prime ministerial stint in the same breath as the hard-hitting Rajinder Puri. Both had almost identical punch lines on why leaders aren’t building the nation instead of mandirs and masjids.

Earlier, during the Emergency, Indira Gandhi’s Information and Broadcasting Minister V C. Shukla found Laxman offensive enough for him to be summoned and warned. In the early 1990s, in the Delhi BJP circles, there was a sudden buzz that the veteran cartoonist was past his prime. It didn’t take much to trace the displeasure to the recurring caricature of L K Advani with a charioteer’s headgear in the aftermath of the rath yatra. In his pocket cartoons, Laxman tracked broad trends rather than specific news events, thereby creating shelf life. When a decade-old cartoon from the archives is rerun, the reader sees it as oven-fresh. Laxman’s everyman shed his black cap and donned the checked coat in 1960 and has since stayed unchanged, the same way as a comic strip character like Snoopy or Dennis. The country’s sole iconic cartoon character remained like the Ambassador car the cartoonist drove, a vintage visual marker that lets you calibrate change or the lack of it. The mildly bewildered silent spectator journeyed with his more vocal wife who made an occasional appearance through ministerial bungalows, official banquets, expert meets, public gatherings, shop floors, city streets and the countryside, all of which appeared in rich detail in a single column. The elaborate backdrops were improvised distils from the extensive sketching Laxman did over the years. From the real Mysore to Madhya Pradesh, and Chennai to the imagined Malgudi. When he broke into a demo of how to rub pencil lines and create the greys of a city like Kolkata, you saw the child who knew the sheer pleasure of drawing.