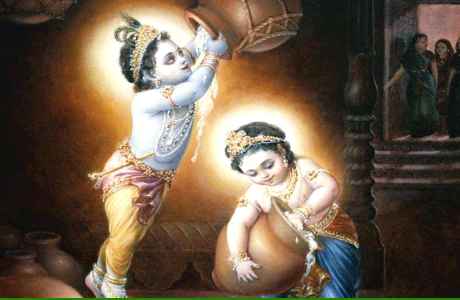 Millions of Mumbaikars trooped on to roads here Monday to celebrate the Dahi Handi festival.

Amidst tight security, teams of ‘Govindas’ went around from one place to another, singing, dancing, throwing colour and building human pyramids for the prize hanging many metres above.

One Govinda team managed to build an eight-tier pyramid at the Sankalp Pratishthan in Worli, organised by Minister of State for Housing Sachin Ahir.

Another succeeded in building a nine-tier pyramid in Borivli in northwest Mumbai.

The tone for the day’s festivities was set when the first ‘handi’ was cracked at Madhav Wadi in Dadar amidst loud cheers.

Despite stringent safety measures by most mandals, at least 20 Govindas were injured after falling from tall human pyramids, ranging from five to eight tiers, at various Dahi Handi events.

At many places, organisers had for the first time arranged safety belts attached to cranes which saved the Govinda at the topmost tier from falling when the human pyramids collapsed.

This year, mega-prizes running into Rs.1 crore and above were conspicuously missing and replaced by much smaller amounts, ranging from Rs.25,000 to a little over Rs.1 lakh by various organisations.

In Mumbai, a huge event was held by Congress legislator Krishna Hegde with an extra dose of Bollywood celebrities at Vile Parle.

The fisherfolk of Worli organised a simple, traditional Dahi Handi celebration with a lot of dancing, singing and feasting, while an all-women team of Gopikas built a pyramid at Paushtik Dahi Handi Mandal in Goregaon.

A 89-year-old mandal in Dadar, among the oldest Dahi Handi mandals in the city, saw several third-generation Govindas taking part in the celebrations, with their fathers and grandfathers watching and cheering them.

There are 1,000-plus large Dahi Handi mandals, and another 2,600 small mandals besides around 670 Govinda teams, registered in the city.

This year, around 110 mandals had kept prizes of Rs.1 lakh and above.

A huge of rush of devotees was also witnessed at various Krishna temples in the city, especially at the ISKCON temple in Juhu where celebs queued up with commoners for prayers since Sunday midnight.

This year’s Dahi Handi is being celebrated under the shadow of the Bombay High Court’s stringent restrictions, including human pyramids up to 20 feet tall, and ban on Govindas below the age of 18. The order was later stayed by the Supreme Court.