Fifa, show you’ve got balls and ban Luis Suarez for our kids’ sake 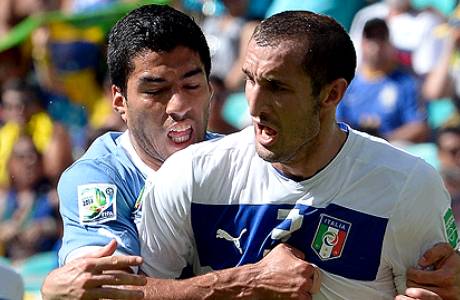 As the world reacts to Luis Saurez’ biting incident last night, two concerned parents say Fifa should make an example of him – and chuck him out of the World Cup

My son, sitting on his World Cup replica football, had a confused look on his face.

This time against Italy in the most famous football tournament in the world.

George is six-years-old. He lives and breathes football. He sleeps in Arsenal pyjamas, he watches re-runs of Match of the Day constantly, and is permanently attached to a football.

His ambition, of course, is to play professional football and he looks up to the likes of Stephen Gerrard, Aaron Ramsey and Gareth Bale as beacons of brilliance in a game that captures little boys’ imaginations around the world.

Which is why he can’t quite understand why Liverpool striker Suarez would bite someone, apart from the fact that he obviously has some sort of problem.

Footballers are in a position of privilege. They should be role models to my boy. He invests hours into watching them and trying to learn to play like them. And for that reason Suarez, or Jaws III as he should be named, should be banned from football for biting yet another opponent during a match.

There is a nation full of aspiring footballers. They are young, clean, and talented and they deserve to see clean, talented footballers who do the talking with their feet, not their teeth.

Allowing Suarez to continue his rampage would teach boys like my son that it’s OK to do that.

Think you’re going to lose out on a tackle? Oh, don’t worry, just try and bite the opponent without the ref seeing. Once can possibly be forgiven. But twice? And now three times?

While it’s clear he needs some sort of anger management, Fifa need to stand up and make an example of him.

In a tournament of this magnitude, the most watched tournament in the world, the punishment needs to fit the crime.

To put it crudely, the bosses at Fifa need to show they’ve got balls, react fast and get this dangerous, silly, troubled, overpaid man off the world stage.

How many boys will go to school this morning and think it’s OK to bite their schoolmate in the playground? Make an example of him Fifa or all those boys sitting on their footballs, dreaming of becoming future heroes, will turn into villains who use their teeth instead of their feet.

David Owens, dad of one, says:

The definition of fear: Being at an all you can eat buffet when Luis Suarez walks in.

This morning I’m picturing the scene at the Uruguay hotel last night as the players sat down to their post-match meal, basking in the rosy glow of a famous victory over Italy to seal their passage to the next round of what has been a pulsating and utterly mesmerising World Cup in Brazil.

I would imagine it played out something like this – the waiter walked up to Suarez and asked him what he would like from the no doubt fulsome menu, he turned and smiled displaying the unholy molars that would put Janet Street-Porter and Esther Rantzen to shame, before uttering the immortal words – “I’m not hungry, I had an Italian earlier.”

Okay so that probably didn’t happen.

More than likely the footballer who is bitier than a sulky piranha, was banished to his room to reflect on his actions and listen to the Uruguay manager sobbing uncontrollably in an adjacent room.

You can understand the grief-stricken gaffer’s exasperation at Suarez inexplicably taking chunks out of the opposition defence by biting Italian defender Giorgio Chiellini.

The talismanic striker will no doubt justifiably face a lengthy ban, casting severe doubt on his country’s potential to progress in the tournament.

For me sat at home with my daughter as we watched the game together the Liverpool forward’s predilection for sinking those fiercesome gnashers into his opponents allowed me the opportunity to once again reinforce the ground rules of good behaviour – the dos and donts of proper child-like etiquette.

However, the very fact I was telling a five-year-old who is already aware that biting is unacceptable, that she shouldn’t do it because ‘the naughty man’ did it, tells its own story.

If someone so young knows that sort of behaviour is strictly off-limits, then shouldn’t a spectacularly well-paid, if spectacularly flawed individual. That this is the third biting incident in his career is now not a coincidence, but something deeper and more disturbing.

We, like every other parent, have a responsibility to our children to tell them that biting is wrong, just as slapping, punching, kicking, spitting and cheating are all unacceptable.

That all of these transgressions are continually spotted on the professional field of play tells us that football’s governing bodies need to take the zero-tolerance approach of parents and clamp down on what is becoming an endemic problem with swingeing fines and heavier, more effective punishments.

You wouldn’t let a child behave like this so why would you let a professional sportsman get away with it. What kind of example are you setting to impressionable youngsters otherwise.

Still, teething problems aside Suarez looks set fair whatever the outcome of this latest unsavoury incident – he always has an acting career to look forward to if all else fails.

There’s Jaws, Twilight and Dracula – three roles he can get his teeth stuck into.