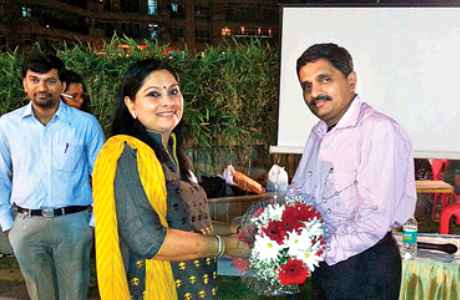 The posh residential area of Powai is grappling with a sudden and unexpected menace. At least 200 children of a high-end complex have fallen prey to drug abuse, creating panic among parents and the society. Stunned by the discovery, housewives of Nahar Amrit Shakti complex, which houses 2,500 families, have come together to spread awareness about the perils of drug addiction. While they are facing stiff opposition from 200-odd families, they are determined to go ahead with their plan as they believe awareness is the only way to stop the growing problem of drug addiction among youngsters.

“Two months back, our society discovered that 200 children in our society were taking drugs. Even more shocking was the fact that the drug supplier was a tenant residing in our society,” said Vibha Agarwal, one of the members of Nahar R12 ladies cultural group who organised the program on Sunday evening.

While the parents of these children got intimated by the drug peddlers and didn’t take the police case further, the society members have decided to handle the issue by spreading awareness of the same.

“The menace of drug abuse among youngsters is reaching dangerous proportions. If we can’t approach police, we can atleast spread awareness and ensure that our children are safe. We therefore decided to have an awareness meeting which was attended by almost 500 families. The parents of children who has already fallen prey to addiction preferred to stay away,” said Shilpa Jain, another member.

Nahar Amrit Shakti is not the only housing society which has decided to take up for drug awareness programs. Around 30 to 40 societies from Hiranandani-Powai have come together after witnessing an alarming rise in number of Powai youths getting addicted to drugs like cannabis. They are receiving support from Dr LH Hiranandani hospital’s psychiatry department along with the Lakers [Rotary Club] who have launched a program Drug Education for Youth (DEFY) to educate parents and bring about awareness.

According to psychiatrists as well as residents, Powai has seen increasing number of boys and girls in the age bracket of 13 to 20 smoking weed in public places.

Dr Harish Shetty, psychiatrist with the Dr LH Hiranandani hospital who is supervising the project, said, “Easy availability needs to be addressed by all the agencies responsible. Reducing supply is absolutely essential to curb use of drugs. While we expect police to start cracking whips on drug peddlers, as parents and society, we should be aware of drug addiction problem and not turn our back on it.” and people avoid talking about it. “We shouldn’t be judgemental and critical about addicts. They need counselling and care and support of the society,” said Dr Shetty.

The one point emphasised in the awareness program is to look for signs of addiction. Mamta Asthana, project co-ordinator of DEFY said, “Red eyes, eye drop in possession, white cloth in pocket etc are few tell-tale signs that a parent can look out for in their kids. With the help of doctors, we have made a list of such signs. We have mailed it to the parents. It is important to be aware of these things rather then being caught off guard.”