Draw of lots for 2,641 flats: Luck shines on MHADA official for a second time 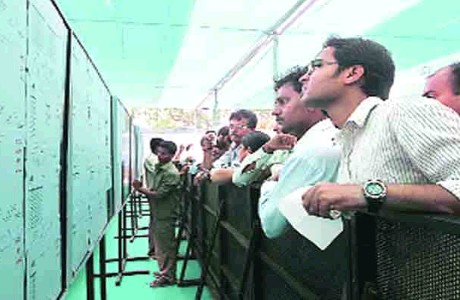 Even after winning a house in Maharashtra Housing and Area Development Authority’s (MHADA) computerised lottery of affordable houses last year, D K Jagdale, Joint Chief Officer of the authority’s Mumbai board, applied once again for a flat through this year’s draw of lot, stating that the apartment he had won was too expensive for its size.

Once again, luck shone on Jagdale as he won a house in the draw, which is nearly double in size, at roughly the same cost. “There have been no further proceedings with regards to the house I had won last year in Powai. I had said that time also, and I am saying it again today that the Powai house was quite costly. I will surrender it now that I have won this house, which is much bigger. Thankfully, I was lucky the second time,” said Jagdale, who had tried his luck seven times, before winning last year.

The house that Jagdale has won this time is in Shailendra Nagar, Dahisar, with a carpet area of 844.9 sq ft, while the house in Powai that he got through last year’s lottery is 476.74 sq ft. The cost of the Dahisar house is Rs 77.24 lakh, nearly Rs 2 lakh more than the Powai flat.

Niranjankumar Sudhanshu, chief officer of MHADA’s Mumbai board, had also applied for a house in Santacruz in the draw, but was unsuccessful. Like Jagdale, a total of 2,641 people from different income categories won houses in Mumbai, Virar, and Vengurla in the Sindhudurg district on Wednesday, among 93,156 applicants. Of the 2,641 houses, 814 are in Mumbai, 1,716 in Virar and the rest in Vengurla.

For next year, Satish Gavai, MHADA’s chief executive, said there would be at least 1,000 houses in Mumbai and 2,000 more in Virar. “Most of the houses in Mumbai will come from redeveloped transit camps. These redevelopment projects were stuck as there was a lot of opposition from residents. However, now with the chief minister having decided to grant amnesty to those who purchased tenancy rights from the original tenants, there should not be too much resistance to redevelopment.”

Chetan Surve, who won a house in Virar on Wednesday, had earlier decided that he won’t marry his girlfriend of four years till he owned a house. “This December, I will get married. I just have to pick a date now,” said Surve. At present, he lives with the families of his three brothers in Virar.

Similarly, Ajit Patil who won a house in the same complex said owning a house in Mumbai always seemed like a distant dream. Patil, who has been living in Mumbai for 3.5 years, said he was close to booking a house with a private developer on three occasions, but it didn’t work out. “When I first came to Mumbai, my relatives, with whom I had stayed, filled out an application in their name for me to get a MHADA house. The understanding was clear that if I won, that house would be mine. After emerging lucky they went back on their word looking at the location and the cost of the house,” he said.

Patil had then consoled himself saying that this was their luck and someday his time would also come. “This is the day,” an elated Patil said.