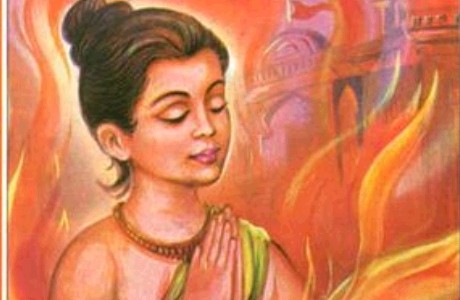 This is the night before Holi ‘the festival of colors’.

According to one symbolic Hindu myth, there was a king named Hiranyakashipu who, like a lot of demons and Asuras, had the intense desire to be immortal. To fulfill this desire he performed the required Tapas (penance) until he was granted a boon by Brahma. Since the God’s do not usually grant the boon of immortality, he used his guile and cunning to get a boon which he thought made him immortal. The boon gave Hiranyakashyapu five special powers: he could be killed by neither a human being nor an animal, neither indoors nor outdoors, neither at day nor at night, neither by astra (weapons that are launched) nor by any shastra (weapons that are hand held), and neither on land nor in water or air. As this wish was granted, Hiranyakashyapu felt he was invincible, which made him arrogant. Hiranyakashyapu decreed that only he be worshiped as a God, punished and killed anyone who did not accept his orders.

His son Prahlad disagreed with his father, and refused to worship his father as a god. He continued believing and worshipping Lord Vishnu.
This made Hiranyakashipu very angry and he made various attempts to kill Prahlad. During a particular attempt on Prahlad’s life, King Hiranyakashyapu called upon his sister Holika for help. Holika had a special cloak garment that prevented her from being harmed by fire. Hiranyakashyapu asked her to sit on a bonfire with Prahlad, by tricking the boy to sit on her lap.
However, as the fire roared, the garment flew from Holika and covered Prahlad. Holika burnt to death, Prahlad came out unharmed.