On the run to claim her nationality 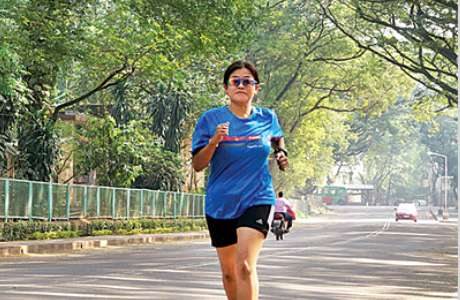 Running with pride of being an Indian comes naturally to this Gorkha girl, Roshni Rai. With her project “Run with Roshni”, she wishes to bring her Nepali-speaking community, which has been facing racial discrimination and an identity crisis, to the Indian mainstream. A Mumbai resident for 10 years, Rai will be running at the Standard Chartered Mumbai Marathon in January with 10 of her community members from Darjeeling.

Coming from a small village called Pedong in Darjeeling, 34-year-old Rai has represented India at various national and international marathons and races. She claims to be the fastest of the three Indian women at the 2012 South African human race “Comrades Ultramarathon” of 89 km and takes pride in her nationality, but everything hasn’t been a smooth sailing for her as she struggled with identity crisis in her own country. “We are Nepali-speaking Gorkhas but we are Indian. Many people don’t realise that Nepali is a language listed in the Indian constitution and found on Indian currency notes,” says Rai, who began the project with the express purpose of being accepted as Indian.

Run with Roshni began in 2011 to support native Darjeeling athletes and bring them to the forefront. “Athletes in Darjeeling participate in every single race to support their own education and, with this project, I wish to bring empowerment and enlightenment to our community,” she says.

Rai began running at the age of 23 when she suffered a heartbreak. “I was heartbroken and bedridden for 15 days. I couldn’t eat or sleep, and felt utterly useless. One day, I just went out on a run and cried my heart out. I kept crying and running. At one point, the tears stopped but my feet didn’t. I felt so light and kept doing it regularly. That was in 2003 and in 2006, I saw the Mumbai marathon and tried to run it without any practice. I injured myself and felt I couldn’t run in future,” says Rai, who ran six half marathons in 2009.

Rai is a Powai resident and an advocate by profession. She completed her law degree from Mumbai university and started working at Colgate Palmolive, where she got to know the runners club and her coach Daniel Vaz, who taught her the systematic way of running a marathon. She took up Run with Roshni in 2011 as a part of a leadership course. Ever since she has been collecting second-hand shoes and funds through Facebook and other means to send them to promising athletes back home in Darjeeling. “Most of them come from a poor background and can’t afford train tickets sometimes. I know these runners and I am confident that they can run a full marathon under three hours without practice. We want to represent our country so that we get accepted as countrymen,” she stresses.

Rai says she is tired of explaining her nationality to everyone. “Even when I practise, exercise or run on the roads, I get called Chinese or chinki. The friendship treaty between Nepal and India further complicates our identity crisis and, for the same reason, we want a separate state of Gorkhaland. The Ghorkaland agitation of the1980s saw 1,500 deaths but nobody talks about it. I only want to spread awareness,” she says.

Rai, who has been honoured with the Kalimpong Ratna award back home, has taken a break from work and is focussing on her book that she wishes to publish next year. She wants to become a full-time social worker.

Rai believes that they can compete with Kenyans and Ethiopians as running is in their blood. “Walking 16 to 20 km everyday is normal for people in the hilly areas. I was inspired by author Brandon I Koerner’s piece on why Kenyans win all marathons and observed that we could challenge them too in the Olympics. There is a boy in our group who used to be a drug addict but became clean due to running. He says it gives him the same high. Running releases the happy hormone,” she says.